Home » »Unlabelled » All About VPN


Basically, a VPN is a private network that uses a public network (usually the Internet) to connect remote sites or users together. Instead of using a dedicated, real-world connection such as leased line, a VPN uses "virtual" connections routed through the Internet from the company's private network to the remote site or employee. In this article, you will gain a fundamental understanding of VPNs, and learn about basic VPN components, technologies, tunneling and security.

What Makes a VPN?

A well-designed VPN can greatly benefit a company. For example, it can:

What features are needed in a well-designed VPN? It should incorporate:

There are three types of VPN. In the next couple of sections, we'll describe them in detail.

­ Ther­e are two common types of VPN. Remote-access, also called a virtual private dial-up network (VPDN), is a user-to-LAN connection used by a company that has employees who need to connect to the private network from various remote locations. Typically, a corporation that wishes to set up a large remote-access VPN will outsource to an enterprise service provider (ESP). The ESP sets up a network access server (NAS) and provides the remote users with desktop client software for their computers. The telecommuters can then dial a toll-free number to reach the NAS and use their VPN client software to access the corporate network.

A good example of a company that needs a remote-access VPN would be a large firm with hundreds of sales people in the field. Remote-access VPNs permit secure, encrypted connections between a company's private network and remote users through a third-party service provider. 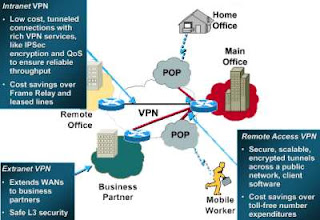 Through the use of dedicated equipment and large-scale encryption, a company can connect multiple fixed sites over a public network such as the Internet. Site-to-site VPNs can be one of two types:

A well-des­igned VPN uses several methods for keeping your connection and data secure:

­ In the following sections, we'll discuss each of these security methods. We'll start with the firewall.

A firewall provides a strong barrier between your private network and the Internet. You can set firewalls to restrict the number of open ports, what type of packets are passed through and which protocols are allowed through. Some VPN products, such as Cisco's 1700 routers, can be upgraded to include firewall capabilities by running the appropriate Cisco IOS on them. You should already have a good firewall in place before you implement a VPN, but a firewall can also be used to terminate the VPN sessions.

Encry­ption is the process of taking all the data that one computer is sending to another and encoding it into a form that only the other computer will be able to decode. Most computer encryption systems belong in one of two categories:

In symmetric-key encryption, each computer has a secret key (code) that it can use to encrypt a packet of information before it is sent over the network to another computer. Symmetric-key requires that you know which computers will be talking to each other so you can install the key on each one. Symmetric-key encryption is essentially the same as a secret code that each of the two computers must know in order to decode the information. The code provides the key to decoding the message. Think of it like this: You create a coded message to send to a friend in which each letter is substituted with the letter that is two down from it in the alphabet. So "A" becomes "C," and "B" becomes "D". You have already told a trusted friend that the code is "Shift by 2". Your friend gets the message and decodes it. Anyone else who sees the message will see only nonsense.


Public-key encryption uses a combination of a private key and a public key. The private key is known only to your computer, while the public key is given by your computer to any computer that wants to communicate securely with it. To decode an encrypted message, a computer must use the public key, provided by the originating computer, and its own private key. A very popular public-key encryption utility is called Pretty Good Privacy (PGP), which allows you to encrypt almost anything. You can find out more about PGP at the PGP site.

IPSec has two encryption modes: tunnel and transport. Tunnel encrypts the header and the payload of each packet while transport only encrypts the payload. Only systems that are IPSec compliant can take advantage of this protocol. Also, all devices must use a common key and the firewalls of each network must have very similar security policies set up. IPSec can encrypt data between various devices, such as:

­ AAA (authentication, authorization and accounting) servers are used for more secure access in a remote-access VPN environment. When a request to establish a session c­omes in from a dial-up client, the request is proxied to the AAA server. AAA then checks the following:

The accounting information is especially useful for tracking client use for security auditing, billing or reporting purposes.

­ Depe­nding on the type of VPN (remote-access or site-to-site), you will need to put in place certain components to build your VPN. These might include:

Because there is no widely accepted standard for implementing a VPN, many companies have developed turn-key solutions on their own. In the next few sections, we'll discuss some of the solutions offered by Cisco, one of the most prevelant networking technology companies.

­ Incorporating the most advanced encryption and authentication techniques available­, Cisco VPN concentrators are built specifically for creating a remote-access VPN. They provide high availability, high performance and scalability and include components, called scalable encryption processing (SEP) modules, that enable users to easily increase capacity and throughput. The concentrators are offered in models suitable for everything from small businesses with up to 100 remote-access users to large organizations with up to 10,000 simultaneous remote users.

­ Cisco's VPN-optimized routers provide scalability, routing, security and QoS (quality of se­rvice). Based on the Cisco IOS (Internet Operating System) software, there is a router suitable for every situation, from small-office/home-office (SOHO) access through central-site VPN aggregation, to large-scale enterprise needs.


Instead of using Cisco IOS, this device has a highly streamlined OS that trades the ability to handle a variety of protocols for extreme robustness and performance by focusing on IP.

Most ­VPNs rely on tunneling to create a private network that reaches across the Internet. Essentially, tunneling is the process of placing an entire packet within another packet and sending it over a network. The protocol of the outer packet is understood by the network and both points, called tunnel interfaces, where the packet enters and exits the network.

­ In a site-to-site VPN, GRE (generic routing encapsulation) is normally the e­ncapsulating protocol that provides the framework for how to package the passenger protocol for transport over the carrier protocol, which is typically IP-based. This includes information on what type of packet you are encapsulating and information about the connection between the client and server. Instead of GRE, IPSec in tunnel mode is sometimes used as the encapsulating protocol. IPSec works well on both remote-access and site-to-site VPNs. IPSec must be supported at both tunnel interfaces to use.

­In a r­emote-access VPN, tunneling normally takes place using PPP. Part of the TCP/IP stack, PPP is the carrier for other IP protocols when communicating over the network between the host computer and a remote system. Remote-access VPN tunneling relies on PPP.

Each of the protocols listed below were built using the basic structure of PPP and are used by remote-access VPNs.

L2TP can be used as a tunneling protocol for site-to-site VPNs as well as remote-access VPNs. In fact, L2TP can create a tunnel between: